"There are Bright Prospects" at Newton High: the Success of Frank Lindley

There is a legend around Kansas
that a baby boy in Newton never is given a rattle,
but a miniature basketball.
This story never has been substantiated,
but it is true in substance if not to the letter.
For the male child in Newton grows up with one ambition,
and that ambitions is 10 feet tall;
the  height of a basket rim from the floor.
(Buller, vi)

"Kansas was a basketball hotbed by the turn of the century" and Newton, Kansas was in the middle.  Several teams had been established and had a record of success.  Click here for part 1.

In 1910 the Arkansas Valley League was formed and by 1926 league members were Hutchinson, Kingman, Newton, Wichita, Winfield, Wellington and Arkansas City.  For many years the Ark Valley was extremely competitive, and Newton was the team to beat.

With the completion of a new high school in 1914, Newton High had "one of the best gymnasiums and basket-ball courts in Kansas."  (Newtone, 1914) The 1914 Newtone noted that there were "bright prospects" at Newton High for students to develop mentally and physically.  At the same time a young man by the name of Frank Lindley was hired as a teacher of athletics and all around coach.

Frank Lindley came to Newton High School at the age of 22. He had played college basketball at Southwestern College and as a sophomore he scored 40 point in a game against Fairmount College (later Wichita State University).  He graduated from the University of Chicago in 1913.

Lindley brought a strong work ethic and an emphasis on fundamentals.  He began experimenting with the new zone defense and is credited with being the first to use it in Kansas.  A fast break offense was used to complement the zone defense.   His teams at Newton High became known for their "hard-nosed zone defense."

Competition for a spot on the high school varsity was fierce.  Boys in elementary school would dream of playing for Coach Lindley. Only those "with talent, and more importantly, devotion to Coach Lindley's principles made the team."  If a player failed, "others could fill their position with little loss of quality."

Lindley had high expectations of his players. Turnovers were inexcusable.  Practices could be grueling.  Clay Hedrick was on the 1942 Championship team and he recalled:

"It didn't matter how long it took.  We ran plays until somebody got a layup or a wide-open set shot.  If the man you were guarding made a basket, you heard about it." (Clay Hedrick, 1942 Championship team)

The Newton High teams were noted for the way they played as a team.  In the early years of the game communication between the coach and players was forbidden during the game.


This did not seem to affect the Newton team because "they were so well drilled in a minimal variety of effective set plays that coaching from the bench was not needed." In 1926, a Newton Evening-Republican reporter noted:


"anyone who is acquainted with Mr. Lindley, knows that he will sit thru an entire game, scarcely showing any signs of emotion, let alone any signs which a player might interpret as signals for certain plays."

A reporter who watched the 1931 NHS team noted:


"the two post system was perfected.  This crew had a lot of close calls but could turn on the heat anytime the occasion demanded. . . .The team is well balanced with three smart veterans, Brown, Edwards, Tourtilott, as a backbone.  Brown is a sharpshooter and a sparkplug.  Tourtillot is the pivotal man on offense, and Edwards directs the offense - using a clever and deceptive passing ability. . . . The best of all teams ever produced by Frank Lindley and Birch Stuart." (Buller, 271-272)

Six other teams finished with only one loss during the season.
Lindley's last  state championship was in 1942. Player, Clay Hedrick later recalled the atmosphere of the town.


"Newton shut down in 1942 when we played in Topeka. We didn't talk about anything but winning a state championship that year.  The town expected, and the years when we didn't win a title we were right there." 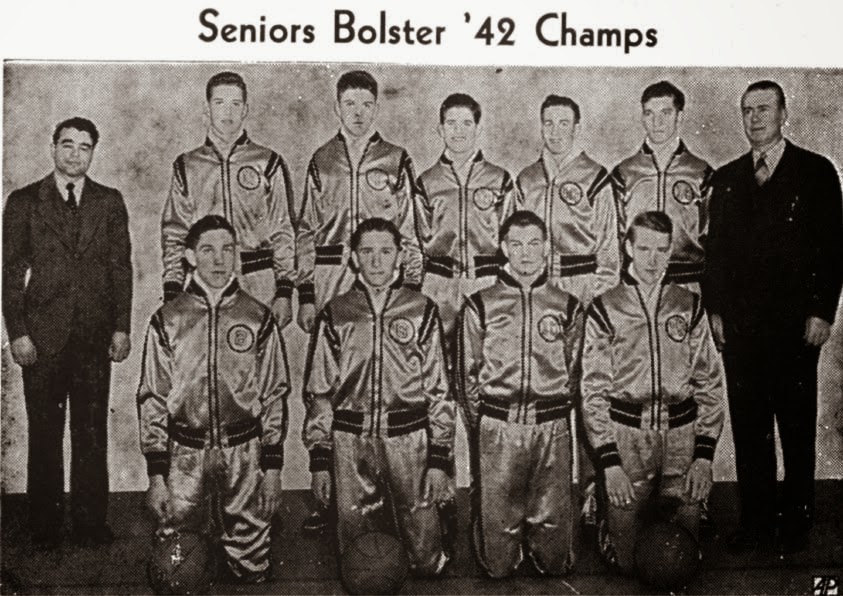 Stan Dunbar, Salina State Journal sports reporter and one of Lindley's fiercest critics, summed up Lindley's long, successful career as a basketball coach on at the time of Lindley's retirement:


"Kansas basketball owes a salute to Frank Lindley, the man who knew it best, taught it best,and without whom the games' progress would have been far slower." (Buller, p. 12)

Next week we will conclude this series with the Ravenscroft years.

Connect with us on
our home page
or
Facebook
Posted by hvcurator at 11:45 AM