"Fly Eradication Program . . . Stop and think what it means.  No more arming yourself with a swatter and pursuing flies around your home all summer.  No flies in your restaurant or stores where you shop.  No flies if you want to sit in your yard this summer."  -Ad placed by the Junior Chamber in the Newton Evening Kansan Republican, 8 July 1949.

On a hot and humid summer afternoon, nothing is more annoying than a fly buzzing around.  Over the years various techniques have been tried to control flies and even eradicate them completely.  The Newton Junior Chamber of Commerce envisioned a "life without flies" in their 1949 ad and they asked for money to help in the cause.

The ad offered tips for fly control from disposing of manure from livestock twice a week to maintenance of the outdoor toilet.  The use of DDT was also encouraged to control flies.

"The most effective way is by the use of a spray gun or hand-sprayer with a DDT solution."

At the time of the above ad, DDT was considered safe and used  regularly on farms and in homes. The Junior Chamber of Commerce's Program was even "sanctioned by Harvey County Medical Society."

DDT (dichlorodiphenyltrichloroethane) was first developed in 1873/74.  The chemical compound was a colorless, crystalline solid that was tasteless and almost odorless.  DDT did not gain widespread use until 1939, when it was discovered to help in the control of mosquitoes.  DDT was used throughout World War II to combat malaria and typhus among soldiers and civilians.  After the war, DDT was used extensively on American farms as a pesticide.  At one point, the annual production of DDT in the U.S. reached 220 million pounds. 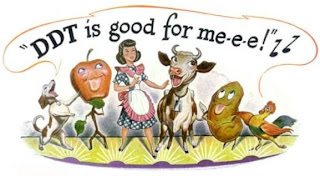 In 1962, Rachel Carson published Silent Spring and called into question the indiscriminate use of the pesticide DDT.  She identified the threat to humans, wildlife, and especially birds.  DDT was banned in the US for agricultural use in 1972.  One result of the ban is the increase in the population of the bald eagle and the return from near extinction of the peregrine falcon.

Without pesticides, people have to rely on the old fashioned way of killing flies.  Dr. Samuel J. Crumbine was an early advocate for healthy habits in Kansas. During his time as secretary of the Kansas State Board of Health from 1899 - 1924, he encouraged disease prevention through the use of simple slogans.

One of his more well-known campaigns  had the slogan, "Swat the Fly".  In 1905, Crumbine attended a Topeka softball game.  The chant of the crowd, "swat the ball", inspired his slogan of "Swat the Fly".  At about the same time, Frank H. Rose  constructed an object from a yardstick and a piece of screen and called it a "fly bat", but Dr. Crumbine renamed it "fly swatter" and the term stuck.