Mustard Plaster and a Warm Iron: The Goerman Boarding House

by Kristine Schmucker, Curator
March has been designated as Women's History Month.  Although the stories of women can (and should) be told throughout the year, we will feature several stories about Harvey County women this month.  This post will focus on Augusta Goerman a woman who was willing to provide a home not only for her children, but also for strangers in her Newton boarding house.
One occupation that was open to women in the late 1890s was that of running a boarding house.  The story of one woman and her boarding house came to my attention through an object in the museum's collection - a silver ladle in a wooden box. 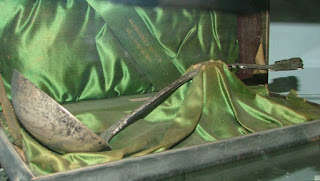 ﻿
The the initials "AG" were inscribed on the ladle's handle. On the inside of the box a piece of paper was stuck with the date "1874". 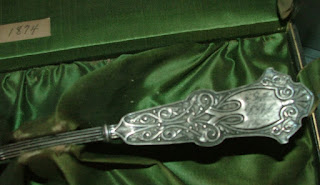 When I looked up the number the only additional information was a brief note - "used in the Goerman House."  What was the story behind this object?

I discovered an Augusta Goerman listed in the 1903 city directory at 119 E. Broadway with the additional notation - boarding house.
According to her obituary, Augusta Goerman lived at 119 E. Broadway in Newton from the mid 1880s until her death in 1939. She was buried at the Hillside Cemetery in Wichita, Kansas, next to her ex-husband, Louis Goerman.  Based on her obituary and census records, the story of Augusta Goerman slowly came into focus.
Augusta was born in Germany on May 6, 1848, and at the age of 24 she immigrated to the United States. She married Louis Goerman in the mid 1870s. Perhaps, the ladle was a wedding gift. The marriage lasted for several years, but they divorced sometime before Louis Goerman's death in June 1884.    Augusta came to Newton in 1886 with her children Louis, Annie, Clara and Herbert.

The 1900 census lists Augusta as 52 years old, "divorced, head of household", and the mother of four living children.  At that time, three of her children lived with her; Louis (22), Annie (20), and Herbert (11).  The census also lists seven men as "boarders". Later census' also list between one and six boarders - both men and women - living at Augusta Goerman's Boarding House.

Goerman House was ideally located within walking distance of Newton's Main Street and  business district.  Axtell Hospital and the Goerz Mill were also close by.  The location attracted many seeking a temporary home away from home to board with Mrs. Goerman.  Her obituary noted that she "operated a rooming and boarding house for 41 years.  Her Broadway residence had been the home of scores of Newton's professional men and women during that time."
Boarding houses provided an alternative to the hotel for travelers, especially for those that may need to stay in the area for longer.  Men working for the railroad frequently found themselves away from home and a boarding house provided a place to stay. Boarding was also a way for a family to make additional money. It was also an acceptable source of income for a widowed or divorced women.

Life in a boarding house provided comforts not readily available at a hotel as this article from June 1900 points out.

No doubt the silver ladle was used to serve many  delicious dishes to hungry boarders and gives us a glimpse into one woman's life in Harvey County life a century ago.


****Note: Mustard Plaster is a home remedy for colds, wet cough, sinusitis and chest congestion. To learn how to make a mustard plaster visit the Natural Remedies Center at:
http://www.naturalremediescenter.com/4177/mustard-plaster-a-home-remedy-for-common-cold-with-runny-nose-wet-cough-bronchitis-pneumonia-sinusitis-pleurisy-and-chest-congestion/

Sources:
Visit our web page at http://hchm.org/ to read our current newsletter.