"Ladies, The Meeting Will Please Come To Order"

"Ladies, The Meeting Will Please Come To Order"

This was a familiar exclamation all over Harvey County on club meeting day.  The term "club woman" was worn with distinction into the mid-20th century.  Were they elitist?---probably, but their members spent part of their time contributing to community projects---fundraising and volunteering for a playground in Newton's Military Park or a Library in Sedgwick (Athena Club).  Club women were often elected to Library Boards and the local Boards of Education.  Middle and upper-class women had the leisure time to devote to their club.  Labor-saving devices made house-work easier and some women had the means to hire help.
The Women's Club Movement spread across the United States after the Civil War (1865) into many large cities and small communities.  Sorosis was the association that set the Women's Club Movement in motion.  The founder, Jane Cunningham Croly, believed that some women were interested in the thought and progress of the age and in what other women were thinking and doing.  A more direct reason was that she and other women journalists were kept from attending a reception for the author Charles Dickens in New York City.  It was a males-only affair.  Croly, an early standard-bearer of women's rights, was inducted into the National Women's Hall of Fame in 1994. 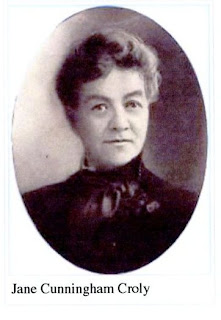 Croly also founded the General Federation of Women's Clubs in 1890.  From this, state and local federations were added.  Kansas was one of the first states to join the General Federation.  The Newton and Vicinity Federation of Clubs first met April 28, 1904.  Representatives from Ladies Reading Circle, Themian, Art Union, Junior Reading Circle, Girls of the Round Table and Aldines gathered in the Harvey County Court House to form a local organization.  By October, 1904 they were meeting in Carnegie Hall upstairs at the new Carnegie Library.  This space now houses the Archives at the Historical Museum.
Most of the club women might have gone to college, but that was a rarity.  They studied lofty subjects at club meeting everything from Electricity to Shakespeare.  Clubs promoted self-education and philanthropy.  Daughters watching their mothers prepare for club day would be the first generation of college graduates.  The love of learning trickled down.

The "Bible" of the club woman was the Program Book.  It contained the year's programs.  There was a theme, usually chosen by the President.  A Literature Committee developed the programs with members assigned to topics.  The local Library and Librarian became important to the club members as they gathered study material to develop the assigned topics.  As a result, a close association developed.

A typical agenda for a meeting included ways to get women to discuss topics.  During the club year a member would be assigned a topic to briefly discuss during Roll Call.  Women were thought to be to be more emotional then rational.  So debates became a common feature in women's clubs.  On May 26, 1893: the date at the Ladies Reading Circle was "a discussion pro & con upon the liability of women to indulge in personalities while engaged in discussion."

At first certain club members were assigned to criticize the good and bad points of a paper that had been presented by a member.  The Critic was playing the role of the college professor and it was believed in study club circles that this would help women learn to accept an analysis of their efforts.  This role was eventually dropped!
The oldest continuously meeting women's club in the state of Kansas is Newton's Ladies Reading Circle.  Begun in 1880, it still meets monthly from October through May.  Other women's clubs that still meet are Junior Reading Circle, Sorosis, Hesston Women's Civic Club and Daughters of the American Revolution.


Did your mother, grandmother or even your great-grandmother attend a woman's club? My mother, Winifred Young, belonged to the Philo Study Club in Kansas City. It met from the 1920s until the 1970s.  I remember her preparing presentations for club day.  She formed life-long friendships as a result of belonging to Philo.


For more information on Ladies Reading Circle, Sorosis Club, the Athena Club and other organizations visit the Harvey County Historical Museum & Archives. For information on our collections visit http://hchm.org/.