An Irreplaceable Piece of History: The U.S.O. Piano

~~This is the second post in a series of three about the Harvey County U.S.O.~~

Our October 18, 2012  post focused on the history of the Harvey County U.S.O. organization during World War II. The Post can be read here: http://harveycountyvoices.blogspot.com/2012/10/welcome-friends-have-coke-harvey-county.html.  This second post will feature the U.S.O. Piano, perhaps the museum's most unique artifact.  Also, in the course of additional research, more photographs of the interior of the U.S.O. were discovered and are included with this post.

Identification for above photo from the book, "Those Who Served.

The Harvey County U.S.O. provided showers and food to the traveling soldiers.
The volunteers also provided a space for socializing and entertainment.


Local lawyer, Fred Ice and his wife loaned a pool table for soldiers to play.
A Kreiter upright piano was given to the Lounge by a local family, businessman, George A. & Effaye A. Sharp.
The piano was manufactured by the Kreiter Piano Company in Milwaukee, MI.  The company was opened  by German immigrant Conrad Kreiter in 1880 (or some sources say 1897).  At one time the company produced 10,000 pianos a year including grand pianos, uprights and player pianos.  There was also a plant in Marinette, WI, but it closed around 1930.  The Kreiter Piano Co. was out of business by 1945.

It is not clear if the Sharp family bought the piano specifically for the U.S.O. , or donated one that they had in their home.


After the Sharp family donated the piano to the Harvey County U.S.O., it was painted white and someone had the idea to encourage soldiers to sign their names and give their home address.

After the war, the piano was given to Bethel College, North Newton for a short time.  American Legion took possession of the piano in 1949 or 50. In 1993, the American Legion was in need of more room and they offered the piano to the Harvey County Historical Museum & Archives, Newton. 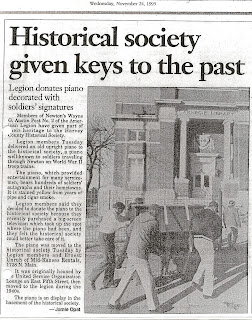 The piano was no longer white.  One theory is that nearly fifty years of tobacco smoke in the Legion turned the color of the piano to the golden color it is today.  Another theory is that at one point, in an effort to preserve the names, the piano was varnished.  This theory has merit, if you look closely, some of the signatures are slightly blurred.
Harvey County's U.S.O. Piano was not done traveling yet.  In the fall of 2009, the museum was contacted by the National World War II Museum in New Orleans, LA about borrowing the piano for an exhibit they were planning, "Entertaining the Troops". 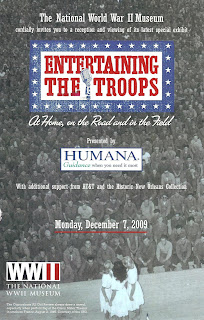 The piano, "an irreplaceable piece of America's wartime history," was returned to the museum in the Spring of 2010. It remains on exhibit at the Harvey County Historical Museum & Archives as a reminder of soldiers who passed through Newton, Ks in the 1940s.

The last post in this series will focus the soldiers that signed the piano and answer the question - did any famous people sign the piano?

Ever wonder what service organizations were developed during the Civil War to aid soldiers? Visit http://barbarabrackman.blogspot.com/2012/10/the-sanitary-commission-in-field.html to learn more.

Posted by hvcurator at 7:50 AM