Souvenirs for Those Who Lived To Tell Their Tales: WWI Trench Art

According to Jane Kimball in her 2005 book, Trench Art: An Illustrated History soldiers have always made decorative or souvenir objects in their spare time. During the Civil War soldiers decorated powder horns and canteens with engravings both personal and patriotic.  Inkwells were created from cannon balls during the Crimean War.  Soldiers during the "Great War" were no different, and it is from this war that the items get the name, "Trench Art" due to the prolonged entrenchment of troops.

Transforming the scraps of metal that littered "no man's land" into rings, bracelets, letter openers and cigarette lighters occupied the soldier during his time away from the front lines.

Local collector, Gene R. Wingo, loaned some examples of trench art to the museum for the exhibit, "Harvey County on the Homefront".

One side shows an almost gleeful Prince with the words "Paris" engraved on his collar. 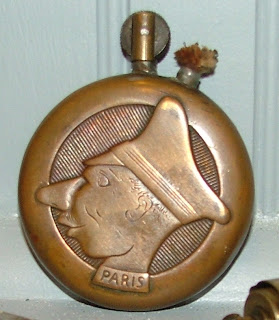 The reverse side shows a very different expression and the word "Verdun" engraved on his collar.

The Battle of Verdun was the longest and bloodiest of the war.  Germans launched a massive attack to gain control of a narrow strip of land that had historic significance to the French on February 21, 1916.  The battle ended when the German Army was pushed back to their original position and conceded defeat on December 16, 1916. In this battle for a roughly 6 mile stretch of land, the French casualties numbered over 360,000.   German casualties were estimated at 340,000.

Newton native, Glenn Wacker, wrote home and described the devastation of the region.


"Went thru villages which had been bombed and bombarded  they were mostly ruins and then all along the road were graves of soldiers. . . . You can be thankful that I did not get to the front for if I had you probably would not be looking forward to my coming home but inquiring about a 2' x 6' piece of land in France. . . . You've heard of Verdun?  Well I've seen it or rather what is left.  Nothing is left whole.  The churches, stores and houses are just piles of rock.  If you can imagine a place where as far as you can see there is nothing but trenches and barbed wire entanglements."

-Thanks to Gene R. Wingo for loaning these unique items for our exhibit.

Aluminum mess kits also provided a canvas for creative soldiers.
Using a penknife or nail, a soldier could engrave his personal mess kit with insignia, patriotic images, dates and details of service.


For more about life in Harvey County during WWI visit our exhibit, "Harvey County on the Homefront", open through May 2013.

Email ThisBlogThis!Share to TwitterShare to FacebookShare to Pinterest
Labels: Harvey County On the Homefront, Trench Art, World War I