This past year, the Harvey County community of Sedgwick has been featured at HCHM.  The exhibit on Sedgwick will be up through mid-December.  The latest blog post features a dispute that almost led to a fatality in Sedgwick and a trial that caught the attention of the whole county for a few days in May 1897.

Thanks to Jim Brower for sending the initial idea and question for this post.

Born in Indiana, Amos Frazier opened a hotel in Sedgwick, Kansas in the mid-1890s. The hotel was located "the first door east of Mathis' Corner Grocery" and had formerly been known as the McClung Hotel.  The Frazier family consisted of Amos, his wife Mary J. and daughter, Bessie.

His ads in the Sedgwick Pantagraph boast of "Bright, Clean Rooms . . . The Only Hotel in Town, Good Meals . . . Special attention to the Transient Trade".  Frazier had the habit of meeting the train when it stopped in Sedgwick and walk people to his hotel.

At some point in early 1896, the Frazier's Hotel became the Commercial Hotel with Charles Dickerson as the proprietor.

Dickerson was a well known businessman in Wichita.  He was well liked and arrived in Sedgwick with a wife and 16 year old son to operate the hotel.  At some point Frazier opened a second hotel "fifty feet away" from the Commercial Hotel on Sedgwick's Main Street.  The two hotels were separated by a small barber shop. 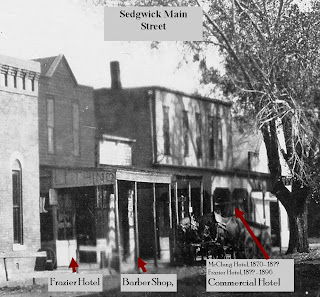 Why Frazier sold his first hotel to Dickerson and then established another one a short distance away remains unanswered. Throughout 1896 and 1897 tensions continued to rise between the two men.

One March morning, both men met the Gulf Train from Kansas City at 6:20 a.m.. According to the Sedgwick Pantagraph two passengers got off the train and both hotel owners met the passengers.**

The Newton Kansan recounts what happened next:

"After the usual boisterous soliciting by the two hotel men, the travelers went away with Frazer to his house.  A quarrel started with this, and on the way to the hotel the men exchanged words, with the final result of Frazer's pulling a 38 and shooting Dickerson."

Five shots were fired and Dickerson was hit twice - one striking him "two inches above the heart and the other in the arm."  The reporters for all three papers expected Dickerson to die of the injury. Frazier, age 50, was unhurt and was taken to jail in Newton.

The Wichita Eagle summarized the events of the morning by noting that "Sedgwick City has not been so wrought up for years, and business there yesterday was suspended on account of the excitement following the conflict."

Amos Frazier had something of a reputation in Sedgwick.  The Newton Kansan reported that "Frazier has the reputation of having an ungovernable temper - a 'bad man when riled'". The Kansan also reported that Frazier had actually chased Dickerson into his house that morning "determined to deliver a fatal shot, although Mrs. Dickerson was present and very heroically shielding her husband from danger."  (Newton Kansan 11 March 1897, p. 1)

Frazier defended his actions telling Kansan reporters that "in the heat of the quarrel Dickerson felt around his hip pocket and he [Frazier] thinking his life was in danger, shot in self defense." (Newton Kansan 11 March 1897, p. 1)

Charles Dickerson did not die. Once he was able to speak, Dickerson reported that the shooting was all done in front of his hotel (the Commercial) and that "two or three shots [were] fired in quick succession while he was attempting to pass through his hotel door".

As a result of the early morning shooting, Frazier faced charges of "assault with the intent to kill." His trial was scheduled for May. The prosecution was led by County Attorney Allen and Hon. Ed Madison, "the famous young criminal lawyer of Dodge City".  Defending Frazier were two well-known Harvey County attorneys, Hon. Harry Bowman and Hon. Charles Bucher, "the king of criminal lawyers of Kansas".

During the two day trial, witnesses for both men described a strained relationship which had started in June 1896.  Each had tried to discredit the other man's establishment.  Dr. C.E. Johnson recalled a time when he was eating dinner at Frazier's Hotel when Dickerson "had solicited him and accused Frazier's place of being a dirty hole."  One friend of Dickerson, Dr. Winn, was heard to say "that Frazier ought to be hung and he would like to be the man to tie the know."

Frazier took the stand and the Newton Kansan dramatically reported his testimony.

"The guest had gone into the hotel office and that he and Dickerson had remained outside, Frazier shutting the office door, the counsel asked dramatically, 'Why didn't you go in and take care of your guest, instead of remaining on the outside with the man you claim to be afraid of?'  Frazier was almost trapped and trembled perceptibly.  After a pause, he answered: 'I had a right to be on the sidewalk.'"

Frazier continued and "admitted that he did not see Dickerson have a weapon, or aim a weapon at any point in the affair."

The trial lasted two days and was given to the jury on Tuesday night.  Wednesday morning the verdict came back "guilty of assault with attempt to commit manslaughter".  Frazier faced up to 5 years of hard labor or more than six months in the County Jail.

It could not be determined if Frazier served time for the shooting or not. The 1900 Census indicates that Amos Frazier was living in Newton; however, by 1910 he was back in Sedgwick.  His wife Mary, died in 1928 and soon after Frazier moved to Wichita to live with his daughter, Bessie Hobble. He died in 1934, he was 87.

Charles Dickerson apparently moved on, perhaps back to Wichita. A brief note in the personal section of the Sedgwick Pantagraph notes that "Charles Dickerson will sell his household goods a public auction at his residence on north Commercial today."

No further information could be found on Charles Dickerson.

"And so ends the last chapter of this lamentable affair in which all parties have doubtless been at fault,  and all parties concerned have likewise suffered much. Let this case stand as a warning to all who may be concerned in annoying business complications or petty jealous rivalry.  When the hot blood of passion mounts . . . beware, for the end is not there and the wake of thoughtless action often come the deepest sorrow." (Sedgwick Pantagraph, 13 May 1897, p. 1)

Notes:
**The Wichita Eagle indicates that there was one passenger. Both the Sedgwick Pantagraph and the Newton Kansan indicated two.

***Charles Bucher practiced law with Cyrus Bowman, "the patriarch of the bar association" in Harvey County at the firm known as "Bowman & Bucher." Bucher was a highly regarded attorney and involved in other high profile Harvey County cases in the 1890s, including the case featured by Bob Myers in his Speaker's Bureau Program, "Harvey Counties Foulest Crime and Greatest Legal Battle".  By 1904/05, Bucher had moved away from Newton and was practicing in Bartlesville, OK.  He then moved to Coffeyville, KS, where he spent the remainder of his life.