At the Corner of Main and Broadway: Pioneer Photographers, Part 1


"At the Corner of Main and Broadway" is Part 1 of a two part series featuring two early Harvey County photographers.

A small notice on the front page of the Evening Kansan-Republican on 6 September 1947 reported the sad news "another old timer passes."  Frank D. Tripp, "pioneer photographer of Newton" died at the age of 91 in Pueblo, Colorado.


Tripp is credited with taking the earliest photo we have of Newton dated the "Summer of 71" and was a well known photographer in Harvey County throughout the 1880s and 1890s. 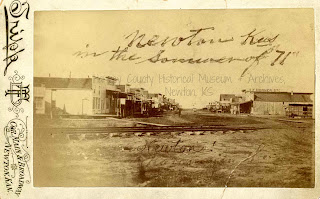 Perhaps one of the earliest photos by Tripp.

In 1882, Tripp married Laura F. Purcell on December 26 in Harvey County. They established a home in Newton and had three children; Homer, George and Genevieve.

Tripp worked as a photographer in Newton from 1880 through 1900.


By 1885, Tripp's business was located at the corner of Main and Broadway in Newton. 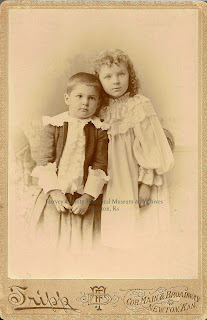 He often displayed his work in the show windows of Main St. businesses during the Cin Quinto festivities. In 1897 he served as President of the Photographers Association of Kansas.

Sometime between  1900 and 1902, Tripp and his family move to Pueblo, Co, where he continued to work as a photographer at "Tripp and York Photographers".  Laura, his wife, died  August 5, 1929 and was buried in a family plot at the Roselawn Cemetery, Pueblo, Co..  Eighteen years later, Frank D. Tripp was also buried there.

While researching F.D. Tripp's life, a mystery emerged. Who was the actual photographer of the 1871 photograph?  Because of Tripp's logo on the photo card, we have always given him credit for taking the photo.  Research revealed that  in 1871, Tripp would have been twelve years old based on information in his obituary, censuses and other records.  An 1870 Census lists a 12 year old Frank Tripp in the household of George and Caroline Tripp in New York.  It seems unlikely that a teenage Tripp took the photo in Kansas a year later.

Were there other photographers that could have taken the photo? Part two of Pioneer Photographers will be posted next week.


Connect with us on
our home page
or
Facebook

Posted by hvcurator at 1:08 PM