"Theron Kinzie of Hutchinson, whose No. 101 turned a complete flip-flop as he was negotiating the east turn at the start of the race . . . It was feared at first that Kinzie was pinned under the car, but he crawled out and was unhurt."

During the summer of 1948, hot rod racing became a popular sport in Harvey County. Each Thursday night, spectators could watch thrilling races at the Jayhawk Amusement Park located at southwest 14th and Elm in Newton, Ks.
Earlier in 1948, three Newton men had an idea for a race track.  The July 28, 1948 Evening Kansan Republican noted; "Starting from scratch early this year, Earl Mills, Lum Spangler and Bill Spradlin have made the local track one of the best in the state."
Racers from across the Midwest would race on the 1/3 mile dirt track at the Jayhawk Amusement Park, in Newton on Thursday nights, and then race at the Hutchinson track and the two Wichita tracks on Friday, Saturday and Sunday afternoons.


﻿On Thursday, July 29, 1948 the Jayhawk held memorial races for a popular hot-rod driver, Dorrell D. Wilkinson, who was killed at the Cejay Track in Wichita on July 25, 1948.  A percent of the gate was given to Wilkinson's widow.  Nearly 30 cars from four states came to race.  Local racers included Jim Roper of Halstead, Shorty Jones and Charlie Ludkie, Wichita, and Bob Thorne, Dallas, TX.

The Evening Kansan Republican  reported the next day:

"Shorty Jones, driving car 312, literally hogged the show as he won the time trials, the consolation, the trophy dash and the 'A' feature."

"the luck of the Newton track held as spills and crashes left drivers almost miraculously unhurt. . . . The most exciting crash of the evening came in the 'A' on the north side of the track when Will Forrest, Wichita, in 355 Jr., was literally pushed through the air by two or three cars tangled up.  A cloud of dust veiled most of the tie up, but cars and men jammed together in a bad one ending up in the pit with no one hurt."


Throughout the summer of 1948, the crowds flocked to the Jayhawk to watch the races.
Local Halstead man, Jim Roper, was a frequent driver.  He is best known as the winner of the first NASCAR stock car race held in 1949. 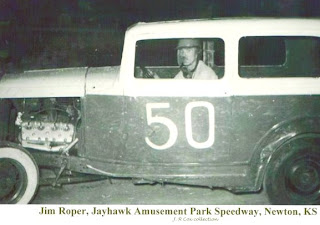 The Jayhawk Amusement Park was in operation for about a decade starting in the summer  of 1948.
Do you have a story or photos of the Jayhawk Amusement Park?  We would love to hear from you!
Share in the comments section of this blog or on our Facebook page, if you cannot get to the museum in person.
﻿
To learn more about racing in Kansas join us on Monday, April 22, 2013 at 7:00 at the museum for "Kansas Takes the Checkered Flag in American Racing"  presented by Sara Jane Richter. This free program is a Kansas Humanities Council Program.

Visit us at
Harvey County Historical Museum & Archives
or on
Facebook.﻿
Posted by hvcurator at 8:36 AM