January in Harvey County has seen some extreme disasters, both natural and "from man's hand."  From "the most disastrous storm to hit Kansas" (from the Halstead Independent, 1961, referencing the blizzard of 1886) and destructive ice to unfortunate and tragic fires, January has historically offered plenty to keep the newspapers busy.

As we enjoy another dry, mild winter, let's take a look back a few years to January 4, 2005, when Harvey County, and much of southcentral Kansas, was hit with a severe ice storm. The ice and accompanying wind brought tree branches and even trunks crashing to the ground, taking power lines, houses and other structures with them. Some county residents were without power for over a week as local and out-of-state crews worked to repair lines and replace poles. 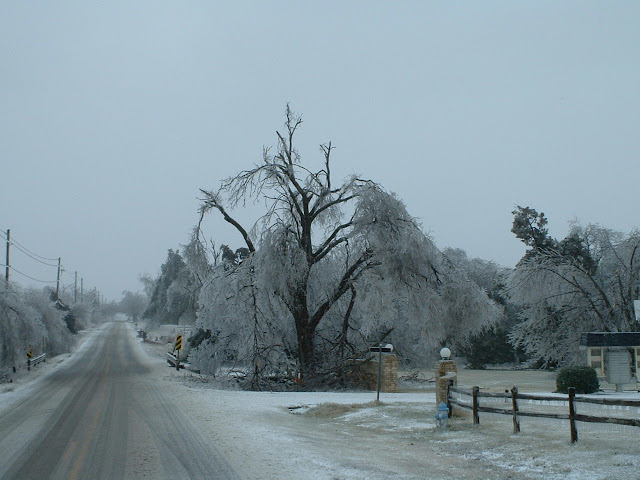 Cold weather left the ice in place from Tuesday until the weekend, when temperatures in the '50's did away with it. The results of the storm could be seen throughout 2005, with piles of brush waiting to be hauled away and building repairs completed.

Earlier times in Kansas saw different effects from harsh weather. A 1961 edition of the Halstead Independent shared the story of the Kansas blizzard of January, 1886. According to this account:
"The last day of the year [1885] was beautifully warm and sunny and very quiet. Old Chris Krehbiel watched the flies flitting about the barn as if in midsummer and remarked to the hired man, 'Morgen fliegen sie nicht so.' (My loose translation is "They won't be flying like that tomorrow morning." Please feel free to correct this in our comments section!) He was right. By the morning of January 1 the temperature had dropped to 20 below zero and the wind was blowing the fine snow around so that it was impossible to see. One blizzard followed another all through January . . ." The storm claimed nearly 300 lives (mainly in the counties west of here, where shelter was not as available) and much livestock. Due to the unusually dry summer of 1885 leaving a shortage of feed, and a very mild fall, many farmers and ranchers had left their stock on the open range, so when the storm hit, the cattle drifted and froze or suffocated. What a difference to the current times when a person would have to work hard to be surprised by a storm due to the readily available weather information  The paper tells the tale of one lucky old sow who lived on a farm just west of Halstead. When the storm hit and she disappeared, the farmer assumed she was dead. Six weeks later in mid-February, she "came waddling out from a pile of snow and straw, almost too weak to walk and very thin, but still alive. Fed and sheltered she recovered." The paper also references the winter of 1911-1912, which was worse due to regular temperatures of 20 below and weekly snowfall, leaving the ground covered in snow from January through March, 1912. But "people were more prepared for it" with better shelter for both humans and livestock, and without the harsh windstorms that accompanied the 1886 season.


As destructive as these examples of snow and ice in our January history have been, fire has also figured prominently, particularly in Newton. The "most disastrous fire in the history of Newton" (Evening Kansas-Republican, January 29, 1908) was spotted at 6:45 AM in the hayloft of Thompson's Livery Stable at 112-114 East Sixth. The fire destroyed the livery and Lehman's Hardware, which was adjacent to the livery and faced Main Street.
Through hard work by Newton firemen, Santa Fe Railroad firemen, and Santa Fe rail workers (who responded to lend manpower as needed), only minimal damage was sustained by the surrounding businesses, mostly due to smoke and water damage to inventory. However, 35 horses died in the stable, with around 14 saved.

Less than a decade later Newton citizens experienced an even more devastating January blaze, this one claiming a life. Less than three hours into the new year of 1915, fire was discovered in the rear (west side) of the Knoepker Opera House, formerly called the Ragsdale Opera House. 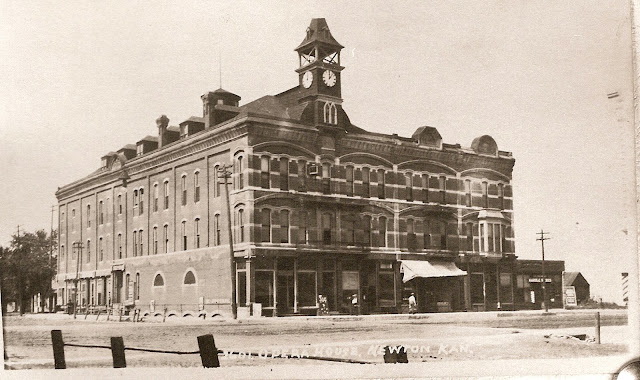 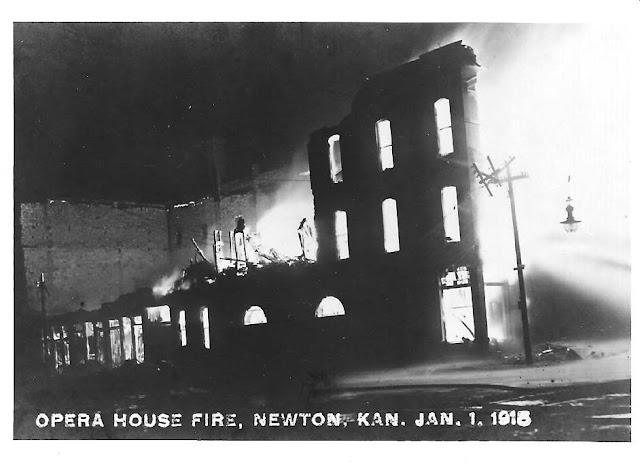 The opera house was built in 1885 by T.P. and J.M. Ragsdale, eventually being sold to J.W. Johnson, then to J.H. Kroepker a few years prior to the fire. The building housed several businesses on the third floor, including Murphy Mortgage Company, Keystone Printing (owned by Mel Reynolds) and a shoe repair shop owned by E.M. Sikes. Also in the opera house was the McManus Department Store. T.H. McManus had spent the last few months of 1914 opening the store at this location and building his inventory back up after being completely burned out in August of 1914 at his former location, 508-516 North Main. (This fire burned the entire 500 block of North Main, including the businesses on East Fifth and East Sixth a story for another post!)
The three-story Trousdale building was directly north of the opera house, and was occupied by a hotel owned by J.E. Hall, who had recently installed new furniture in the rooms. Damage continues throughout the day as walls collapsed onto surrounding objects, such as cars at a neighboring car dealership. 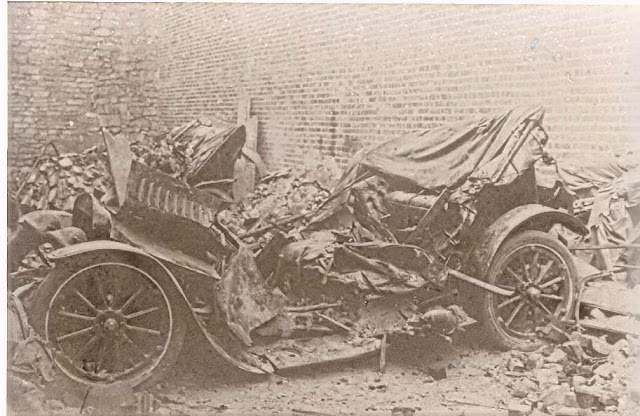 Citizens turned out in full force to see the remains of this downtown landmark, many  not taking the warning of the crushed car very seriously and standing a bit too close to the sagging walls! 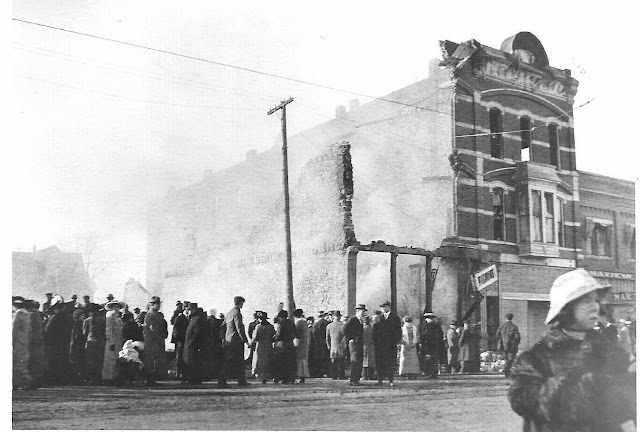 The report of the opera house fire in the January 1, 1915 Evening Kansas Republican illustrates one way journalism has changed over the past century, with an interesting account of the origin of the fire:
"Those most familiar with the details of the fire declare that very distinct odors of oil were detected in the vicinity of the stage when the firemen reached the scene, and it is also intimated that some very reliable information is in the hands of the officers, which point to the fire having been of incendiary origin. Future developments will no doubt establish more certain the correctness of such a supposition."

The paper also reported that a man may have died in the fire. This was confirmed the next day when human remains were found by a "small army of volunteers." Willis T. Green was "an old settler of Harvey County and a well-known figure on the streets of Newton." Born in Ohio, this Civil War veteran moved his family to Harvey County in 1872, homesteading in Darlington Township. He served, at one time, as clerk of the district court and also worked as an engineer at the "old city water works." For eight or nine years prior to the opera house fire, he resided on the third floor of the building. Widowed and almost 70 years of age, he served not only as a handyman for the opera house building, but was employed around town doing odd jobs and repair work. Two married daughters and one son lived in Newton, with the newspaper offering the "sympathy of the community . . . in the loss of their father in so terrible a manner."

We welcome a January without, so far, a major blizzard, ice storm or fire destroying substantial downtown buildings. Disasters are interesting history, reminding me of the Chinese curse, "May you live in interesting times." Here's hoping for a boring month!