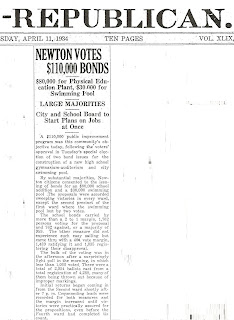 Construction of Newton's Athletic Park swimming pool was started in 1934, shortly after the approval of a $30,000 swimming pool bond by voters.  The new pool opened May 30, 1935.  Local businesses promoted the pool opening with ads and displays featuring swimwear. 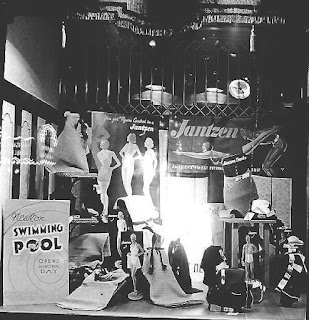 If a person did not have a swimsuit, the editors of the paper noted that "patrons who do not have suits or towels may rent them from the pool management for a small fee."  The admission fee to swim ranged from ten cents for children under 12, to twenty cents for those over 16. The Newton Evening Kansan-Republican estimated that "250 to 300 persons took advantage of the warm afternoon to take a dip" in the new pool on opening day.

Unfortunately, not everyone was allowed to swim in the new facility.  When a group of young black men tried to enter the new pool during the summer of 1935, they were turned away by the pool manager, Harold Hunt.  Kansas civil rights laws in the 1930s required "separate but equal" facilities.  In many communities this meant that if an additional swimming pool could not be built, the city was required to set aside a day or days when black residents could swim.  Across the country, racial exclusion at municipal pools was common.  Most cities reserved the day before cleaning the pool as the day for black residents to swim.  Newton city officials, however, sought a way around the requirement by leasing the pool to an individual to manage.  The manager was given the authority to decide who could enter the pool.  Hunt's policy was to exclude black residents completely. This policy did not go unchallenged.

Samuel Ridley, president of the local NAACP, attempted several times to address the Newton City Commissioners regarding this policy in the late 1930s.  He was ignored each time.  Ridley, with the help of the Topeka civil rights attorney Elisha Scott, filed a suit on behalf of Newton resident, D.E. Kern.

In presenting his case, Scott pointed out that black residents had helped pay for the pool through taxes and that the city had failed to provide an alternative pool for them to use.  This was a clear case of racial discrimination.  The case for the defense was more complicated.  The city claimed that the lessee (Hunt) was solely responsible for the administration of the pool and that he was acting as a private citizen - not a representative of the city.

Hunt's lawyer noted that exclusion of black swimmers was necessary due to the type of pool.  He explained that the pool was a "circulatory type of pool, which meant that the water was only changed once during the swimming season."  This explained why Hunt could not set aside separate days for blacks to swim.  According to Hunt's lawyer, "the only way white residents would swim in a pool after blacks was if the water was drained and the tank scrubbed . . . and this only happened at the end of the season." The defense then attacked the plaintiff's case on technical grounds.  They claimed that it could not be proven that Kern tried to enter the pool.  So, even though Hunt had denied admission to all black people, it could not be proven that he specifically denied admission to Kern.

During the next several years the city's lawyers used various means to delay the court's decision.  At one point, a new pool was promised - when sufficient funds were available.

A ruling finally came five years after the pool was first opened and blacks were denied admission.  On April 6, 1940. the court found Newton city officials liable for any violation of the law by Hunt.  However, the court also ruled that Kern's constitutional rights were not violated since he could not prove that he had "presented himself at the pool and demanded to be admitted to it."

The matter of allowing everyone to swim in the public pool came before the Newton City Commission several times in the 1940s.  At one point, two days a week were set aside for black residents to swim.  Then, at the August 15, 1951 meeting of the City Commission, a local representative for the National Association for the Advancement of Colored People attended the meeting to once again object to the city's policy.  At this meeting, a motion to allow unlimited swimming privileges' regardless of race, was made. The motion passed.  Newton's Athletic Park swimming pool was integrated August 1951.
(Note:  This article is based on a mini-traveling exhibit available at HCHM - contact us if you would like more information or visit http://hchm.org/SpeakersBureau.html for additional traveling exhibit topics.)
Posted by hvcurator at 12:52 PM