From our Collection: Metate and Mano

We are entering into the time of year when traditions become so important. Families in Harvey County come from diverse backgrounds and have many unique and important traditions that usually include food.  Recently, a metate and mano belonging to Lucia E. Palacioz were donated to the museum.  These two objects highlight another culture with deep roots in Harvey County and south central Kansas.

Lucia was born June 25, 1891 in Mexico.  In 1922, she immigrated to the U.S. with her two daughters, Sepriana (11) and Aurora Martinez (10).  Sometime in 1922 or 1923, she married Alejandro Palacioz, who had immigrated to the United States from Mexico in 1911.  Their first child, Crestino, was born in 1923. Lucia was 32 years old.  By the 1930 Census the family had grown to include four more children; 3 daughters and two sons. They were living in the Mexican community in Florence, Kansas.  Their household also included a 13 year old lodger, Felix Dilgadillo.  Lucia Palacioz was 38 years old.

Lucia died ten years later on June 23, 1940, two days short of her 48th birthday.  She was buried in the Mount Calvary Cemetery, Florence, Marion County, Kansas.  This cemetery is associated with the St. Patrick's Catholic Church, Florence, Kansas, and it is likely that the Palacioz family attended there.

Recently, her granddaughter donated Lucia Palacioz's metate and mano that she used as she prepared food for her family over the years. 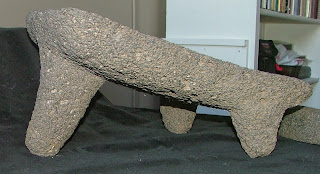 Most metates are made of volcanic rock, basalt or andesite. It is important that the rock is hard with pores. Pores are needed so bits don’t come off too easily when you are grinding. According to food blogger, Rachel Laudan, it takes about five passes of the mano to grind the maize which would yield enough masa (dough) for one or two tortillas.  She estimates that half an hour of work would yield enough masa to make about ten tortillas, "enough for one working person for one day." This task, no doubt, took up quite a bit of the day.


Photos of a Metate and Mano in use. Laudan suggests that while you are working;


"forget that you are getting dizzy, feeling slightly sick and that every muscle is quivering.  Think that you will never have to go to the gym again . . . Think about the joys of modern civilization . . . and that you're glad you weren't born a Mexican woman in the past."


Lesley Tellez, food blogger, notes that the end result is worth the extra muscle power.

"The taste of those tortillas . . . I'll never forget . . . they smelled intensely of corn and they had this kind of fresh, pastoral taste, . . . it was like I was eating something absolutely whole and complete.  This tortilla was not just a piece of unleavened bread, but something with substance. It suddenly made sense to me how people could survive off tortillas in pre-Colombian times. . . . the tortilla IS the meal."

No doubt tortillas made by Lucia Palcioz were just as good.

Posted by hvcurator at 9:00 AM