A Gifted Illustrator: the Work of Reed L. Crandall

Beginning in 1938 through 1950, comic books became more and more mainstream. Many comic book historians consider this period to be the 'Golden Age' of American comic books.  Stories filled with superheroes and villains gained readers and fans.  During this time, publishing comic books became a major industry and provided jobs for artists and writers.   Among the great artists that 'inked' for these stories, Reed Crandall is considered one of the best.  To read about his early life and roots in Newton, Ks, see Part 1, "A Guy Who Just Wanted to Draw."

After graduating from the Cleveland School of Art, Crandall worked on several projects.  His first real break came in 1940 when he got a job at the Jerry Igler Shop in New York. Igler turned out comic art quickly and cheaply in a production assembly line. Crandall could draw quite fast, so he quickly became a popular artist with Igler.  Crandall earned a salary of $30 a week.  He also took jobs on the side. In 1941, one of his side jobs led him to his "debut in the world of four-color comics" when he inked a fifteen page story for Timely Publication's "Captain America #2" (April 1941). 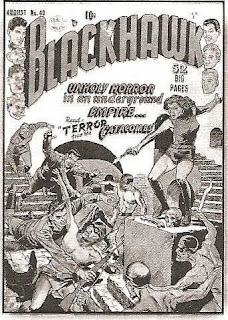 In late 1941, he began working for Quality Comics and Everett 'Busy' Arnold.  His salary was $1000 a month. While at Quality Comics he worked on the popular comic, Blackhawk. Originally created by Will Eisner and Charles Cuidera, the comic first appeared in Military Comics #1 (August 1941). Blackhawk was a "military strip with grim mercenary characters" produced during the height of the Second World War.  Comics during this period reflected  "not only the positive attributes of patriotism, courage, and honor . . . but also a darker view of the American dream, including racism, nationalistic chauvinism and sexism."  (Gleeson, p. 21) In 1942, Crandall produced the feature for Blackhawk #12 (October 1942). The writers would give Reed a story line and he would draw from that. His concern for detail and realism was apparent. He would often research the time period to make sure his drawings were historically accurate. 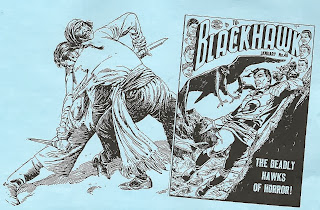 His work for Blackhawk authentically depicts the planes, tanks and weapons.  Reed's work was more realistic than many working at that time reflecting his interest in illustration and not cartooning. His last appearance as a Blackhawk artist is in the August 1953 issue.


After he left Quality he went to work at Entertaining Comics Publications (EC) and publisher William M. Gaines. Then, in 1964, James Warren, publisher of Famous Monsters, contacted Crandall to work on a new, black and white horror comic magazine.

Creepy
One of the projects  Warren was working on featured adaptations of Edgar Allan Poe stories for Creepy.  Crandall drew for "The Cask of Amontillado" (Creepy #6) and many consider it one of his greatest achievements.
He was able to capture the dark, dank underground catacombs perfectly.  His attention to detail was again evident.  He drew every brick, spider web and rat creating a dark setting for the tale. Crandall also worked on another Poe classic, "The Tell-Tale Heart" for Creepy #3.

Crandall had started to draw for Treasure Chest, an educational Catholic publication, in the late 1950s.  For twelve years, the Treasure Chest contract would be his "bread and butter" providing him with a steady income. 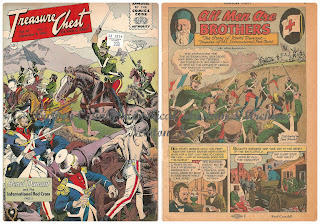 One comic book historian noted that "Crandall was an immensely gifted illustrator, a master of anatomy whose figures were full of grace, character and realism." (Gleeson) 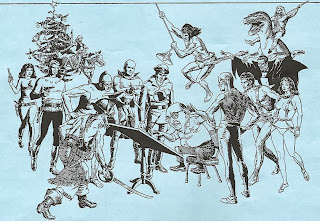 Although Reed Crandall is best known for his work as a comic book illustrator,  he worked in a variety of mediums including watercolor, painting and scratch board.  In all of his work, his skill is evident.

By the 1960s, Crandall was living in Wichita with his mother. After his mother passed away, Crandall would often live with his sister, Ella, where he had a room in the basement of her house.  Nephew, John, recalled that one day, his uncle went out across the street and sat down with his pencil.  He sketched the house, brought it inside and completed the work with watercolor.

Crandall experienced difficulties with his health in the early 1970s. His last published story appeared in 1973, "This Graveyard is Not Deserted" in Creepy #54. In 1974, he took a job as a night watchman and janitor at a Wichita Pizza Hut.  He suffered a stroke late in 1974 and spent the last eight years of his life in a care home.  Even while in the care home, Crandall kept busy creating portraits and other small projects for family and friends. Reed Crandall died of a heart attack on September 13, 1982.  He was 65 years old.

The "guy that loved to draw," found a way to use that talent throughout his life. He left a legacy of work that will be enjoyed by friends and family for years.  Reed L. Crandall was inducted into the Will Eisner Comic Book Hall of Fame in 2009.


"In the annals of comic art illustration, . . . he is remembered as one of the greatest talents who ever worked in the genre." 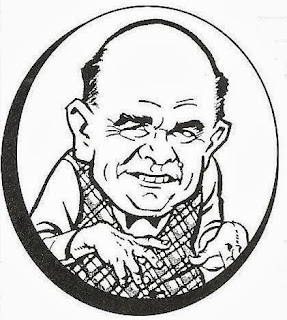 Note: Reed L. Crandall worked on many other projects, including the Doll Man and Jungle Comics.


Sources
Connect with us on
our home page
or
Facebook