"A Trail of Sorrow"


"People with good memories will recall that the small tornado which struck southeast of Newton Thursday, May 1, came on the thirty-fifth anniversary of the devastating tornado which swept thru Harvey County west of Halstead May 1, 1895."
(Evening Kansan Republican, May 2, 1930)

Two of the deadliest tornadoes to hit Harvey County struck during the month of May.  This blog post will describe the Halstead Tornado of  May 1, 1895.

The forecast in the Newton Kansan for the first week of May in 1895 was sunny, pleasant, and dry.  It had been six months since the county had experienced measurable rainfall and the crops were suffering. Nothing indicated that lives were to be changed in an instant the afternoon of May 1.

At 4:30 in the afternoon a storm formed over Lake Township in section 22.  As the storm traveled eighteen miles north - north east across the county, "dealing death and destruction," it was at times as much as a half mile wide.


"The storm was plainly visible to people for miles around and it seemed to waiver  first in one direction, then in another.  an eyewitness said traveled not much faster than a man could run." (Halstead Independent, 3 May 1895, p. 2)

"As it traveled it created a great noise and those in its track, as far as possible sought shelter in cellars or tried to get out of reach of the storm."  (Newton Kansan, May 2, 1895)

Most of the damage occurred in Lakin Township starting at the Wear farm six miles southwest of Halstead,  where  "it totally destroyed the fine new home of Joseph Wear, and wrought such dreadful havoc with his family." The Wear family consisting of Joseph, Fredricka and 3 year old George arrived in Harvey County in 1878 and established a farm in section 7 of Lakin Township. They had at least five more children. On the afternoon of May 1, 1895, without warning, tragedy struck the Wear family.

When the dark clouds formed;

"Two children went into the cellar; Mrs Wear and babe were in the house and Mr. Wear was out doors,  he laid down on the ground and clasped his arms around a tree, and it was the whipping of the ground by his body, or the tree striking him as it swayed in the wind, or from being hit by debris from the house that wounded him, his head, arms and body being one mass of bruises and one rib being broken.  The bodies of Mrs. Wear and her babe were found about fifty yards southeast of where the house had stood."         (Newton Kansan, May 2, 1895)

In addition to Mrs. Fredricka Wear and one month old Mathilda, 11 year old Grace and 5 year old Herman were killed in the storm.  Joseph and daughter Alice were severely injured.  The "trail of sorrow" continued to the nearby Armstrong farm where Civil War veteran and homesteader, William C. Armstrong, along with his elderly mother-in-law, Ellen Chapin, were found dead in a cornfield a quarter of a mile away to the northeast.

A few miles down the road, Mrs. Lou Coats and her 18 year old daughter, Daisy E. Neff, tried to outrun the storm.


"The storm overtook them on way and they sought shelter in the poultry house [on the J.A. Commons Farm]; the daughter was killed and the mother so badly injured that she may die.  All of Mr. Commons' buildings were destroyed."


One family that was able to escape the storms fury was the Menno S. Hege family.  Menno "gathered a number of children returning from school, in his wagon with his wife [Katherine] and drove rapidly away from the storm, leaving his property to its fate."


Although the Menno and Katherine escaped with their lives all that remained of their farm was a book. The Hege family suffered the largest financial losses.  A new ten room home with a value of $3,000, a barn, and 12 valuable horses, forty-five head of hogs, all household goods and implements were destroyed in the storm.  The Halstead Independent noted that a low estimate of the total loss would be $8,000.  Hege was insured for $3,500. 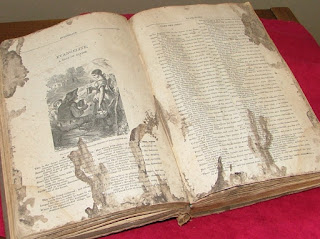 In a letter written May 5, 1895, Daniel Baer in Summerfield Ill. wrote his daughter Katie Hege to express his sorrow over the events of May 1.

"I received you letter yesterday and with a heavy heart I read of the terrible affliction you had to bear.  When I think about it, I  am depressed by the thought of knowing that a home can be lost in such a short time . . . thank the Lord that you have been so fortunately saved by His mercy, and no one was injured . . . My daughter, I must close, I can't write anymore."

In all, seven people lost their lived in the May 1, 1895 storm; nine were severely injured and twenty farms were leveled to the ground. The Halstead Independent noted;


"In every instance, where the people went to their cellars, they saved their lives, deaths having occurred to those who were above ground at the time of the fearful violence." (Halstead Independent, 3 May 1895, p. 2)

According to the Newton Kansan, May 2, 1895; "Farm stock suffered terribly all along the route of the storm, and the money loss is estimated at full $200,000."

Along with the tragedy, there was some hope. The Newton Kansan noted below the account of "Winds Wild Fury!" that "for the first time in six months Harvey county received a thorough soaking from a six hours' rain . . . It was grand and glorious and everybody is happy."

The Halstead Independent also pointed out the bizarre twists of a tornado when it reported that "Mr. Frizzell's buggy was found near Moundridge, about fifteen miles away." In a humorous story, the same paper reported on the misfortunes of  "a gay old bachelor who lives near Halstead."

"He is about 42 years old, good looking, . . . and well fixed financially. . . . Not less than twenty times has be been at the marrying point but always avoided the yoke by some hook or crook.  It is said that his chief failing was love letter writing and no man in the state had more young lady correspondents.  That gay old bird was in the cyclone belt last week.  He escaped himself but the cyclone picked up his trunk . . . the result is that all the people along the line of the cyclone for thirty miles are reading his love letters and the old boy is in a terrible stew over it.  Up in McPherson county the letters have caused a craze among the girls and they are writing to him by the dozen." (Halstead Independent, 10 May 1895, p.2)

In a strange twist, thirty-five years later on the same date another tornado "swept nearby Newton." The storm formed three miles south of Newton near Old 81 and "moved rapidly northeast , taking almost the same path that the cyclone of 1917 took in its devastating course."**** Although there was property damage, no lives were lost with this storm.  In fact, the Evening Kansan Republican noted that "hundreds of Newton people watched the storm cloud from the time it first appeared almost directly south of the city until it disappeared almost east of town."

This photo was taken by Walter Beverforden from his home at 315 S. Pine, Newton. 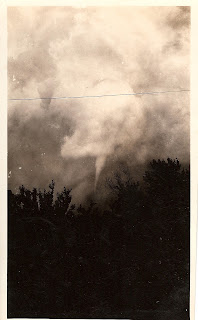 ****The 1917 tornado that went through Harvey County was part of a series of storms that made 1917 the third deadliest tornado season in Kansas on record and will be featured in a blog post May 23, 2013.

Posted by hvcurator at 8:44 AM