The Story Behind the Object

Sometimes the story of how an artifact gets to the museum is almost as interesting as the actual history of the artfact.
Recently, we got a call from the EtCetera Shop in Newton.  They had just received a donation of what appeared to be an old waitress uniform.  Would we be interested in looking at it?
Neatly packed in a large Ziplock bag was a heavily starched, blue striped dress with a two pieced white apron  and a collar.  The only other clue was a typed name on each piece, "Brenda J. Odle." 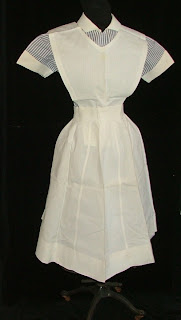 Research revealed that it was actually a nurses uniform from the 1960s.  Clothes worn by nurses underwent a significant change in the last half of the 20th century.  In the 1880s, as nursing was gaining progress in becoming a respectable occupation for women, the uniforms they wore were designed to protect against illness and to protect virtue.  Nurses wore uniforms that covered the entire body.  Uniforms also helped identify the woman as a nurse.


Change in uniforms came during and following the Second  World War.  By this time, nursing was a career that was respectable.  Skirts and sleeves were shortened to aid in movement during care.  As function and comfort of the wearer became more important the traditional starched aprons disappeared.  By the 1970s scrubs were seen in many hospitals.  Today, most nurses wear the loose fitting garments.  The uniform donated to the museum represents the time of transition from a formal nurses' uniform to the more comfortable scrubs.


An obituary for Brenda Jean Odle Laughlin told the rest of the story.
Brenda was born May 18, 1940 in Junction City, Kansas, to Wayne F. & Louise Blaker Odle.  In High School, Brenda enjoyed singing and was in several vocal groups at school and church.  In 1961, she graduated from Stormont-Vail School of Nursing, Topeka, Kansas.  That same year, on October 8, she married William "Bud" Laughlin.

After graduation she worked as a registered nurse in various places, including Bethel Deaconess Hospital in Newton, Kansas.  Possibly she wore this uniform during her time at Bethel Deaconess prior to her marriage.
Brenda and Bud moved to Hesston, Kansas and she was very active in the community, serving of the Board of Directors for the Hesston Resource Center and a volunteer with  Hesston EMS. She worked at Hesston Corp until her retirement in 2003.
The couple had three daughters.
Brenda died on January 16, 2012 at her Hesston home and is buried at the Hesston Cemetery, Hesston, Kansas.